Item i02404 - Embroidered Badge of the 27th City of Winnipeg Battalion 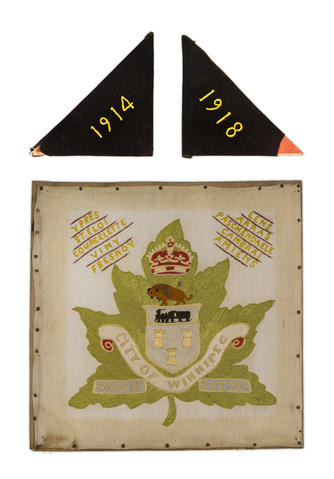 Embroidered Badge of the 27th City of Winnipeg Battalion

Gifted to the City of Winnipeg by the creator Herbert H. Clark in 1960.

Consists of an embroidered badge of the 27th City of Winnipeg Battalion with embroidered text referencing names of battles - "Ypres", "St. Eloi", "Courcelette", "Vimy", "Fresnoy", "Lens", "Arras", "Paschendaele" [Passchendaele], "Cambrai", and "Amiens". This piece is encased in a frame that also contains two triangular embroideries that display the years of the start and end of the First World War, 1914 and 1918.

There no restrictions on use. The City of Winnipeg Archives asks to be credited if being used for publication.