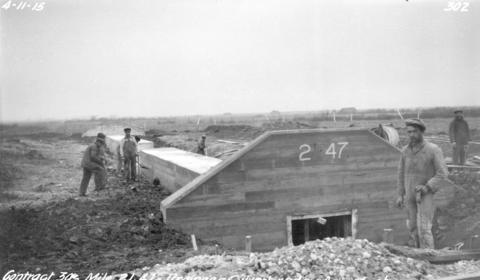 The Greater Winnipeg Water District (GWWD) was incorporated in 1913 to supply water to the City of Winnipeg and surrounding municipalities. In May 1914, construction began on the aqueduct to bring water from Shoal Lake to Winnipeg. In March 1919, water from Shoal Lake flowed into Winnipeg’s taps and on September 9, 1919, His Royal Highness The Prince of Wales (The Prince Edward) dedicated the aqueduct. In 1935, the Greater Winnipeg Sanitary District (GWSD) was incorporated to manage wastewater collection and treatment for the participating sections of the GWWD. These two corporations existed until 1961, when their functions were taken over by the Metropolitan Corporation of Greater Winnipeg.

The GWWD was originally comprised of the City of Winnipeg, the City of St. Boniface, the Town of Transcona, the Rural Municipality of St. Vital, and parts of Fort Garry, Assiniboia, and Kildonan. By 1960, the area serviced by the GWWD also included parts of St. James and Tuxedo.

As no roads existed along the proposed route of the aqueduct, the GWWD created and operated the Greater Winnipeg Water District Railway to run parallel to the route to facilitate the movement of materials and workers. Construction of the railway track began in 1914 and was completed in 1915. The track runs from its terminus in St. Boniface to Waugh, Manitoba near Shoal Lake. After the aqueduct was completed, the railway was also used to carry freight and passengers in an effort to reduce the costs of construction. Freight included firewood, pulpwood, poles, railway ties, ice, mail, milk, gravel and sand. Although initially only three trains ran a week, at the peak of its operation up to four trains a day hauled gravel for use as an aggregate in concrete manufacture.

The first meeting of the GWWD Administration Board took place on July 30, 1913. By the fall of 1913, active work was underway and survey parties were determining the most economical route from Shoal Lake. As the waters of Shoal Lake are part of the Lake of the Woods, which crosses the boundary into the United States, it was necessary to secure the approval of the International Joint Commission. It was also necessary to secure the consent of the Ontario Government as the boundary line between the provinces of Manitoba and Ontario passes through Indian Bay, a tributary of Shoal Lake. Further sections of the aqueduct were located on reserve land belonging to Kekekoziibii Shoal Lake 40 First Nation and the sale of this land was required. The provisions of the Indian Act allowed for reserve lands to be sold with the price of the land set by the Governor in Council and the proceeds of the sale going to the Band. The Department of Indian Affairs valued three thousand acres of Kekekoziibii Shoal Lake 40 First Nation's reserve land at fifty cents per acre. Approximately fifty-five acres on the mainland were valued at three dollars an acre. As the Falcon River ran into the proposed intake area in Indian Bay, a diversion was built so that the waters of Falcon River, which had an unwanted colour, ran into Snowshoe Bay instead. The Falcon River diversion, consisting of a 2.4 km dyke and 840 m channel, solved the problem of unwanted colouration of the water supply, but had the effect of limiting Kekekoziibii Shoal Lake 40 First Nation's access to the mainland.

The City of Winnipeg Archives acknowledges the following sources:

Ennis, David A. “Developing a Domestic Water Supply for Winnipeg from Shoal Lake and Lake of the Woods: The Greater Winnipeg Water District Aqueduct.” Master’s thesis. University of Manitoba, 2011.

Special thanks to the Water and Waste Department for supplying key details.

Digital copy sent to City of Winnipeg Archives from Water and Waste Department in 2015 (2015/07).

Photograph of workers next to a Winnipeg Aqueduct drainage siphon near Meadowvale, Manitoba. Photographer is unknown.

Originals are located at the Water and Waste Department

The contract number in the caption is incorrect and should be 31.