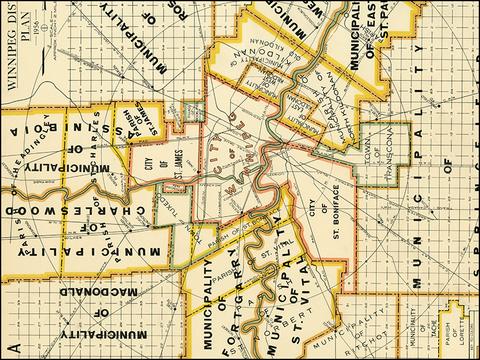 The Canada Fire Underwriters’ Association (CFUA) was founded in 1883 by thirty participating fire insurance companies “to establish tariffs of rates for all cities, towns and villages, making due allowance for construction and the fire appliances of each, and to make rules for the due regulation of business generally”. To reflect changes and growth in the mandate of the CFUA, the Association underwent several name changes over the years, changing its name to the Canada Underwriters’ Association in 1936 and to the Insurers’ Advisory Organization in 1975.

In 1911, the CFUA struck an agreement with the Charles E. Goad Company by which the Company was to create and revise fire insurance plans exclusively for the Association. This arrangement was terminated in 1917 and soon after the CFUA established its own plan department, known as the Underwriters’ Survey Bureau, Limited. In 1931, the Bureau purchased all assets of the Goad Company, including the copyright to insurance plans. The CFUA’s Western Canada Fire Underwriters’ Association Plan Department created fire insurance plans for the Prairie Provinces until the centralization of plan production in 1960. After completing the revision of the Winnipeg plan in 1975, the Association decided to cease development of fire insurance plans due to increasing costs and limited demand. The Insurers’ Advisory Organization is still in existence today.