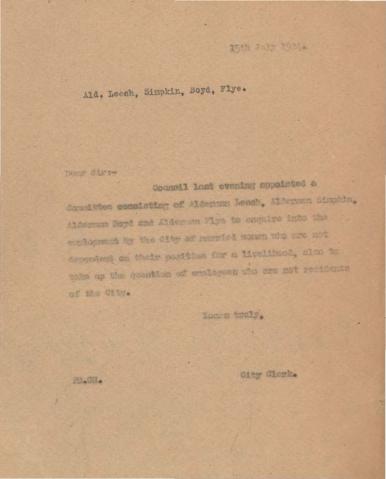 The City of Winnipeg was incorporated in 1873 by a charter granted by the legislature of Manitoba. At incorporation, the City established a committee system of government – while Council was the governing body for the City, it was in committee that civic policies were formed and executed. The initial task for the first and all subsequent Councils was to strike standing committees for the Council year. In addition to standing committees, Council established special committees to investigate and manage various projects, issues and questions placed before the City. Special committees were typically struck by a Council motion that outlined committee composition and responsibilities. From about 1924 onward, special committees and their associated files were assigned an alpha-numeric code beginning with the letter “A”.

The Special Committee to Enquire into the Employment of Married Women was appointed by Council on July 14, 1924 to determine how many married women were employed by the City. The Committee was also required to gather information regarding residency for all City employees. Based on a detailed survey of City departments, the Special Committee recommended to Council and Council adopted a policy of not engaging married women if they were not dependent on their work to manage their affairs and of not engaging any help resident outside the City. The Special Committee was composed of four aldermen. No file code was assigned to this special committee.