Winnipeg, which derives its name from the Cree words win for muddy and nippee for water, is situated on a floodplain at the meeting of the Red and Assiniboine Rivers and along tributary rivers such as the Seine and La Salle. Part of Treaty One Territory and the National Homeland of the Red River Métis, these rivers have for thousands of years been an integral part of humanity’s relationship with the land. As a floodplain, the area has also experienced years in which heavy flooding damaged property and led to large-scale evacuations. During these times, Winnipeggers have come together as a community to protect and help each other. Many of these stories are preserved in the records held by the City of Winnipeg Archives. These records include Council and Committee minutes documenting municipal decision-making, reports made by City Departments, letters sent by residents to municipal officials, photographs of flooding and flood-fighting efforts, and many more. Equally important are the stories not told in the records, such as those of people living outside the City whose experiences of floods and flood prevention efforts varied according to race, gender, class, and geography. We invite you to explore the records of flooding and reflect on these histories. 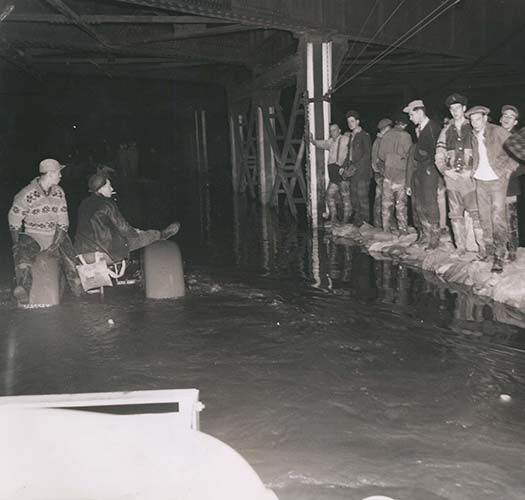 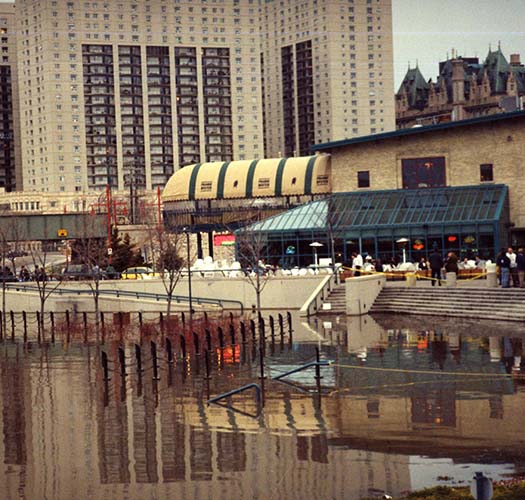 Floods in the 19th and Early 20th Centuries

The 19th century saw several significant flooding events. In 1826, for example, the flooding was so bad that it damaged Fort Garry, leading the Hudson’s Bay Company to construct Lower Fort Garry farther down-river. Incredibly high water levels were also recorded in 1852 and 1861. After incorporation in 1873, the City of Winnipeg weathered particularly bad floods in 1882, 1892, 1904, 1916, 1942, and 1948. These floods were also experienced by the municipalities surrounding Winnipeg. In 1916, for example, much of Norwood and St. Boniface was underwater, and in 1955, a resident of St. Vital informed Council that he had experienced 15 floods in 28 years and “lost in each one of them”. 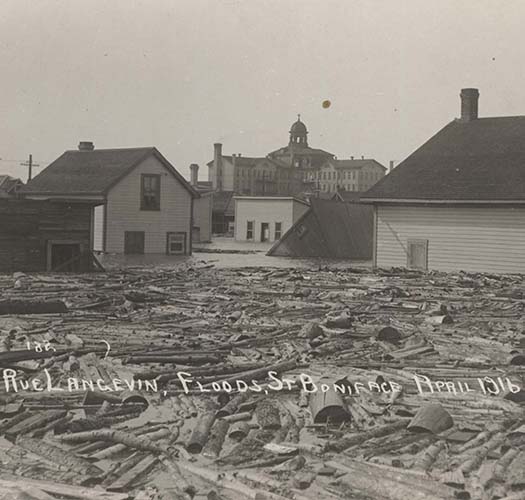 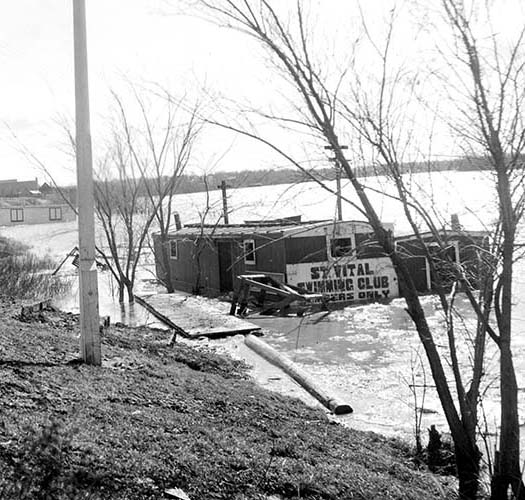 The flood that hit Winnipeg in the spring of 1950 was particularly severe and caused significant damage. The melting of heavy snows in April and heavy rainfall in May caused water levels to rise to the highest they had been since 1861. One-eighth of Winnipeg was underwater as entire neighbourhoods were submerged. St. Vital was hit especially hard, but Riverview, Luxton, and Wildwood also experienced heavy flooding. A state of emergency was declared and the Red Cross was brought in to help with what was at the time the largest evacuation in Canadian history. Around 100,000 people were evacuated, including almost the entirety of St. Vital’s 20,000 residents. By the time the flood ended, thousands of homes and buildings were destroyed, and over $1.25 million worth of damage was done. The severity of the 1950 flood was one of the driving forces behind the construction of the Red River Floodway. 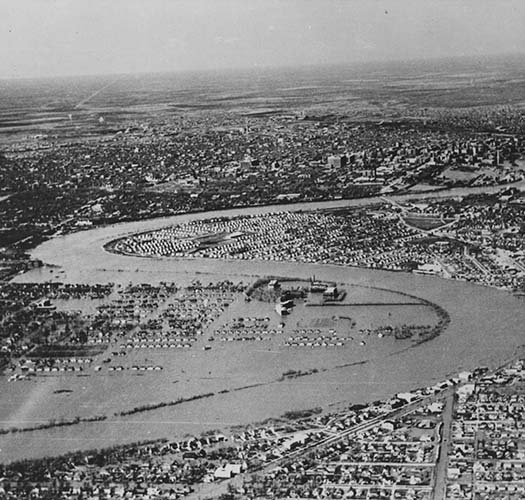 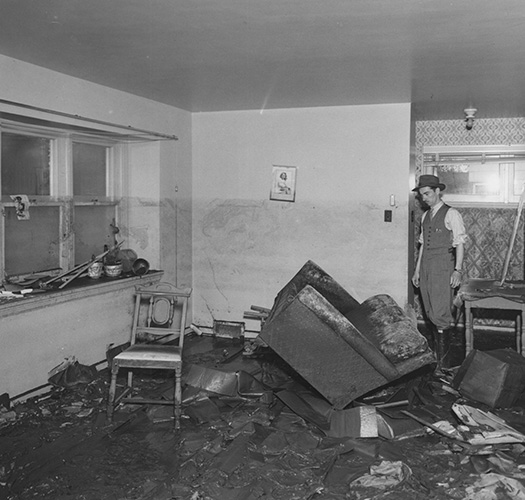 The Red River Floodway was built between 1962 and 1968 to mitigate the damage caused by yearly flooding. Spearheaded by Premier Duff Roblin’s administration – giving it the nickname “Duff’s Ditch” – the Floodway consists of a large channel that diverts excess water from the Red River around the City. Regulated by a control gate south of the Perimeter Highway, the channel flows east around the City before reconnecting with the Red River upstream at Lockport, Manitoba. The Floodway cost $63 million to build and was at the time the second largest earth moving project in the world, second only to the Panama Canal. It was expanded in 2005 and has prevented tens of billions of dollars in damages. 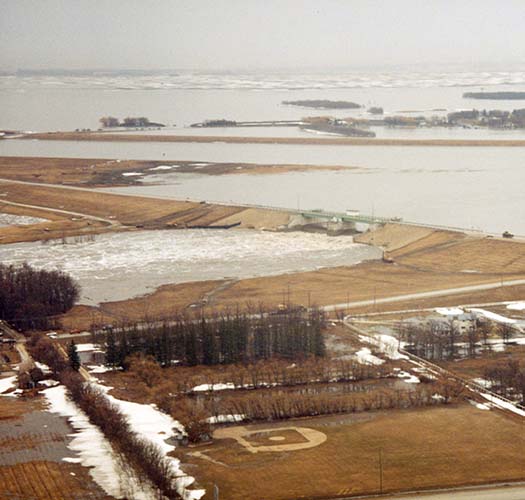 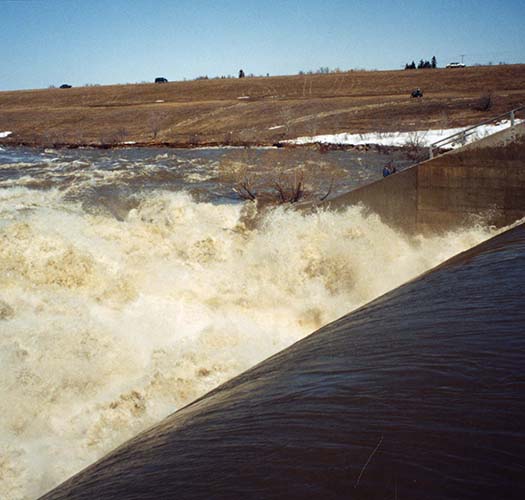 Also known as the “Flood of the Century”, the flood of 1997 is remembered as one of the worst floods in Canadian history and as a moment of unity for all those who came together to defend Winnipeg and help their communities. Flood preparations were already underway when a disastrous blizzard hit in early April. The Red River Floodway was put to work, but dikes were still needed at various locations within City limits. On April 23rd, Mayor Susan Thompson declared a State of Local Emergency and the first mandatory evacuation was ordered. Despite the severity of the flood, the majority of Winnipeg was protected. This was due in large part to the Red River Floodway, an extensive network of dikes throughout the City, and the hard work of thousands of City employees and military personnel who worked with more than 70,000 volunteers and did everything from sandbagging and helping with evacuations to operating a Flood Hotline. On May 23rd, Mayor Thompson sounded the all-clear, putting an end to the emergency. The flood displaced more than 9,000 residents from about 3,000 households, primarily in the south of the City. 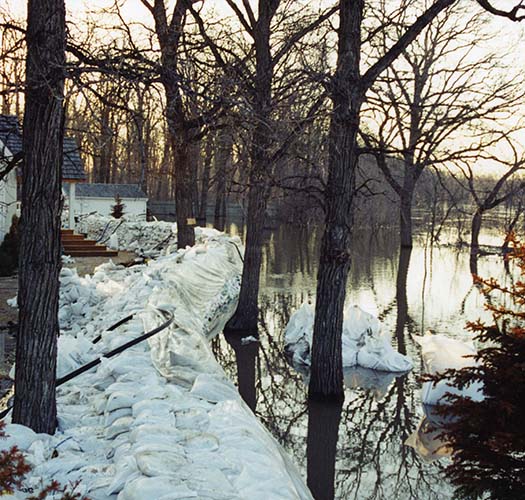 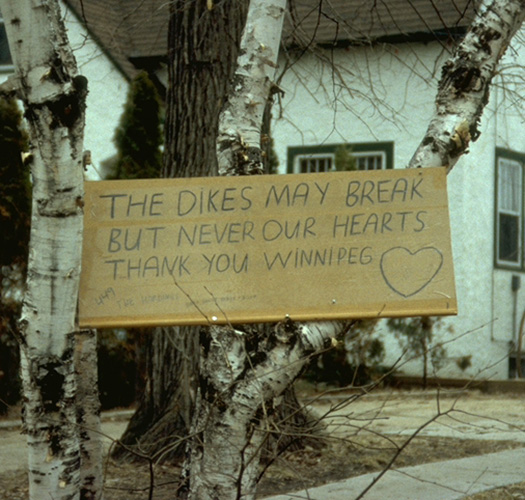 The City of Winnipeg Archives is the official repository for the records of the City of Winnipeg. Many of the collections held by the Archives can be used to conduct further research on flooding in Winnipeg. When conducting research, it is important to remember that most of the records held by the Archives were created by and for City officials in the course of their duties. We invite researchers to reflect on the absences and biases in these records and consult other sources.

The following list of records is not comprehensive. Researchers are encouraged to use the finding aids and collection descriptions on Winnipeg in Focus to assist with identifying records and to contact the Archives. Note that there may be restrictions on access to records with personal and/or sensitive information.

This Committee was created shortly after the 1997 flood by the Board of Commissioners with a mandate to collect records related to flooding and flood-fighting in Winnipeg. Most of the records are from the 1997 flood and include photographs, aerials, maps, press releases, ephemera, and more. Some of the photographs from this collection are available online (see photograph section). The collection also includes an index to other archival flood records.

Consists of records donated to the Archives by Mayor Susan A. Thompson. Thompson served as Mayor of Winnipeg during the 1997 flood and was instrumental in guiding flood-fighting and recovery efforts. Records include photograph albums of Thompson’s work during and after the flood, as well as newspaper clippings and other textual records.

Scrapbooks created by the City Engineering Department related to the 1948, 1950, and 1956 floods. Some contain photographs, many of which are online (see photograph section), while others contain newspaper clippings. Descriptions of these scrapbooks are available online.

Minutes: the official record of the proceedings of Winnipeg City Council. Indexes are available online for the years 1897-1971 and for 1972-1980, and minutes from 1990 to the present can be found online through the City Clerk’s Decision Making Information System. Minutes also exist for the Councils of the former municipalities of the Greater Winnipeg area.

Communications: letters, reports, and other correspondences sent by residents, City Departments, and others to City Council. A finding aid is available online for the years 1874-1972. Similar communications exist for some of the former municipalities of the Greater Winnipeg area.

The minutes and communications of some of the various Committees, Boards, and Commissions that have existed over the years contain information about flooding in Winnipeg. Some examples include the Special Committee on Flood Rehabilitation, the Special Committee on Flood Control, and the Board of Commissioners. General descriptions of some committees can be found online, but researchers should contact the Archives for more information. More recent Committee minutes are available online through the City Clerk’s Decision Making Information System.

The Metropolitan Corporation of Greater Winnipeg existed between 1960 and 1971 and dealt with inter-municipal matters affecting the Greater Winnipeg area. Its records include minutes, communications, and committee files, as well as records of Metro divisions like the Parks and Protection Division, which was responsible for emergency planning. A full finding aid is available online. 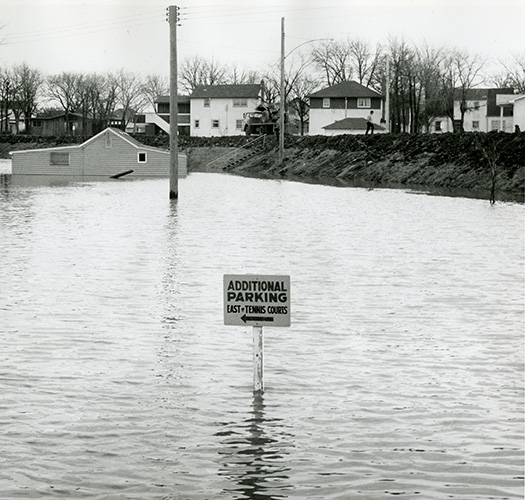 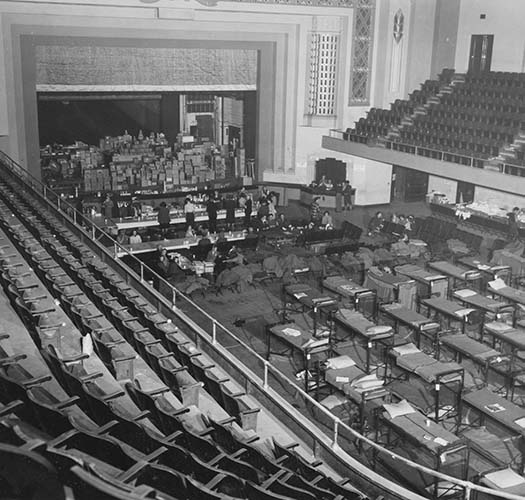