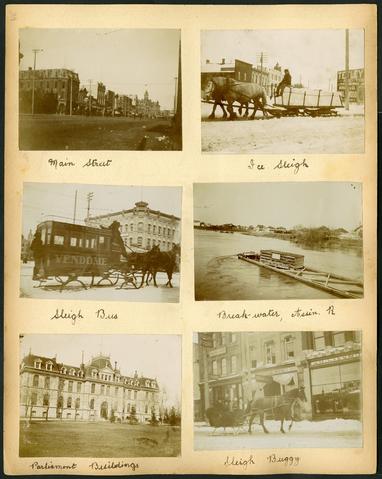 Page 29 of a photograph album created by brothers Arthur and Fred Landen of Hull, England. Page consists of 6 photographs taken by Fred Landen depicting, clockwise from top-left: Main Street facing north from McDermot Avenue; a horse-drawn sleigh carrying a large block of ice in front of the Transit Hotel on Notre Dame Avenue East (now Pioneer Avenue); break-water on the Assiniboine River with houses in the distance; women in sleigh buggy in front of storefronts on Main Street, between Portage and Graham Avenues; the old Manitoba Parliament Building; and a horse-drawn sleigh bus advertising the Vendome Hotel in front of the Commonwealth Block on Main Street and Market Avenue.