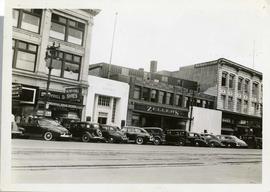 Donation by H. H. Clark of embroidered badge of the 27th City of Winnipeg Battalion

Correspondence related to the gifting of an embroidered badge of the 27th Winnipeg Battalion by Herbert H. Clark, bandsman and runner of the battalion during the First World War.

Photographs of the Kelvin Community Centre in Elmwood and a game of lacrosse played by the Elmwood Pats. These photographs were used for the book “A City at Leisure” by Catherine Macdonald.

Photographs of boulevards around Winnipeg, some new, others damaged.

Photographs of and project development component forms for the Harbourview Recreation Complex in Kil-cona Park.

Two photographs of the exterior of the Crescentwood Community Club in the winter.