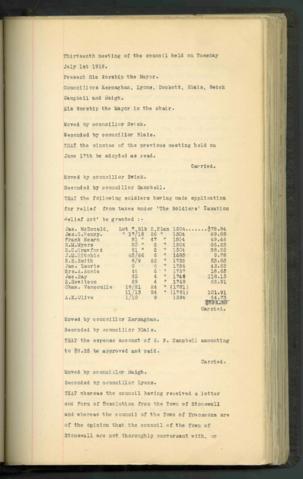 The Town of Transcona, Manitoba was founded in 1912, was granted a City Charter in 1961 and was dissolved in 1972 when it joined eleven other municipalities in amalgamation with the City of Winnipeg. Its mandate was to provide municipal services, primarily to immigrants attracted by employment opportunities following the arrival of the Canadian Pacific Railway (1907) and the Grand Trunk Pacific Railway shops (1908). It’s immediate predecessor was a Board of Trade, set up in 1911 to govern the growing settlement. Prior to creation of the Province of Manitoba in 1870, the area was administered by the Council of Assiniboia (1835-1870). Following the Dominion Government of Canada’s purchase of land from the Hudson’s Bay Company in 1869, the newly formed Province of Manitoba had jurisdiction over the area and began the process of municipal incorporation. In 1921, Transcona declared bankruptcy and the area was administred by the Manitoba government until 1928. The name “Transcona” is derived from the National Transcontinental Railway and continues today as an electoral ward within the City of Winnipeg.