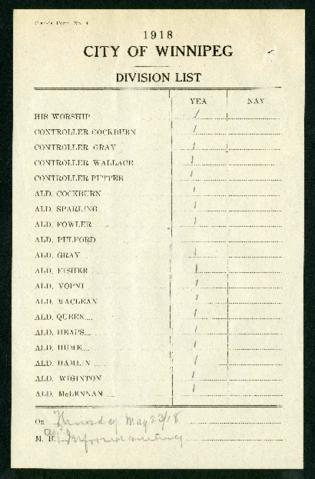 The City of Winnipeg, Manitoba was created by Provincial statute in 1873. Its mandate was to govern and provide municipal services to citizens attracted to trade expansion between Upper and Lower Fort Garry and St. Paul, Minnesota. The City sprang from the Red River Settlement, an unincorporated village. Prior to creation of the Province of Manitoba in 1870, the area was administered by the Council of Assiniboia (1835-1870) and local community leaders, primarily Métis, who had camped within a fifty-mile radius of the junction of the Red and Assiniboine rivers since [1733]. Following the Dominion Government of Canada’s purchase of land from the Hudson’s Bay Company in 1869, the newly formed Province of Manitoba had jurisdiction over the area and began the process of municipal incorporation. Assiniboia had been created in circa 1812 by Lord Selkirk, who brought Scottish agricultural settlers to the area.

Since 1874, the City managed its affairs through various boards, commissions, and committees. Affiliations between 1881-1972 were thirteen suburban municipal Councils and, between 1960-1972, the Metropolitan Corporation of Greater Winnipeg (established to co-ordinate service delivery in the metropolitan region).

After 1972, when Chapter 105 of the Statutes of Manitoba came into force, the City of Winnipeg amalgamated with twelve area municipalities and the Metropolitan Corporation of Great Winnipeg into one city government.

The election of the first Council for the Unified City of Winnipeg was held on October 6, 1971 and the new City came into legal existence on January 1, 1972. The new unified City Council consisted of 50 Councillors elected on the basis of one from each of the 50 wards and a Mayor elected from the City-at-large. The Inaugural Meeting of the new Council took place on January 5, 1972.

Thirteen Community Committees were established under the Act; however, in 1974, on the recommendation of the Ward Boundaries Commission, the provincial government enacted legislation reducing the communities from thirteen to twelve while maintaining fifty wards. In 1977, further legislation reduced the communities to six and the wards to twenty-nine. Each had a Community Committee of Council and comprised the Councillors who represented the wards within each particular community.

Card showing votes of Councilors and Controllers on unknown issue from a Council meeting on May 23, 1918.