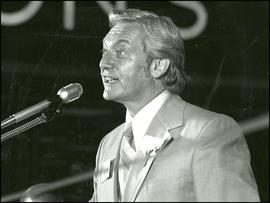 Born Daniel Abraham Yanofsky in Poland in 1925, Abe Yanofsky came to Canada as a small child. His family eventually settled in Winnipeg. Yanofsky was a graduate of the University of Manitoba and a Rhodes scholar, and earned a law degree at Oxford. He returned to Winnipeg where he became a successful lawyer and Queen’s Counsel. Yanofsky served as Alderman and Mayor of West Kildonan from 1961 until 1971, then as Councillor on the Unicity Council of the City of Winnipeg from 1972 until 1986. Among his accomplishments in civic politics was construction of the Seven Oaks General Hospital and Wellness Institute in Winnipeg’s north end.

In addition to his legal and political careers, Yanofsky was an exceptional chess player, winning the Canadian Chess Championship eight times. His development as a player began early. By the age of eleven he was recognized as a child prodigy, and represented Canada on second board in the world chess Olympiad in Argentina in 1939. He was named Grand Master in 1964 by the world chess organization, FIDE. Yanofsky was a central figure on the local chess scene, wrote the Free Press chess column for many years and was responsible for bringing the Pan American Chess Championships to Winnipeg in 1974. 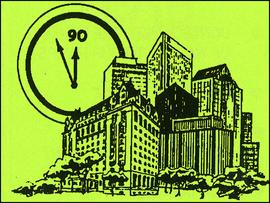 Winnipeg into the Nineties (WIN)

Winnipeg into the Nineties (WIN) was a volunteer group of citizens with a vision of how the City of Winnipeg should and could be developed. Created in January 1989, meetings were held bi-weekly at the Social Planning Council of Winnipeg offices and were chaired by Shirley Bradshaw. Members of the Founding Committee were: Shirley Bradshaw, Al Ducharme, Elizabeth Fleming, Mike Gidora, Barry Hammond, Marilyn Letts, Shirley Lord, Christine McKee, Evelyn Reese, Greg Selinger, Tom Simms and Donna Mae Yeo.

WIN was formed to oppose the so-called "Gang of 18", an informal group of councillors who held a majority on council and who met regularly before official council meetings to determine the city's agenda. The "Gang of 18" was a successor to the Independent Citizen's Election Committee, a right-wing municipal party that dominated Winnipeg's city council from the early 1970s to the early 1980s. WIN’s objectives were: to provide a vision for the City of Winnipeg and a future agenda based on clear policies for action; to promote open government and freedom of information in the interests of informed decision-making; to ensure accountability of elected officials on the basis of agreed, openly-stated policy positions; to promote ethical government and financial accountability through the open declaration of election contributions, individual statements of assets, and clear, conflict of interest by-laws; and to encourage citizen participation and consistent, reasoned decision-making that could be explained and justified to the general public. WIN worked to raise community awareness of municipal issues in Winnipeg, to facilitate the construction of a policy platform designed to achieve its stated objectives, and to field and support candidates who supported their objectives. WIN endorsed several candidates in Winnipeg’s 1989, 1992 and 1995 municipal elections, including future Mayor Glen Murray and future premier of Manitoba, Greg Selinger.

In the 1990’s WIN continued as a political organization in Winnipeg, under the name “Winnipeg in the '90s”. It was dissolved by members in late 1996. 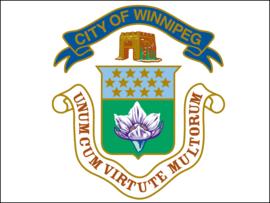 In 1920, the Women's Canadian Club of Winnipeg erected a temporary monument in front of the Bank of Montreal building at Portage and Main. When the temporary monument was taken down in November of 1923 to make way for the Bank's own war memorial, the question of securing a site and constructing a monument for the City to honor its war dead was again raised by citizens. Given that the City had an interest in the outcome of this initiative, Council appointed representatives to the Winnipeg War Memorial Committee by motion on February 21, 1927. The Winnipeg War Memorial Committee had representation from groups like the Canukeena Club, the Imperial Veterans, the Army and Navy Veterans, the War Widows Association, the Women's Canadian Club, the Rotary Club, the Trades and Labour Council, the Canadian Legion, the I.O.D.E., and Winnipeg City Council. The committee concluded its work in June of 1929 when it requested that the memorial it had unveiled in November of 1928 be transferred to the Parks Board for perpetual care and maintenance.

The WTC was authorized to investigate and consider all matters related to the control and regulation of traffic, and make recommendations to Council; make and enforce temporary regulations to meet emergencies and special conditions; direct and co-ordinate all operations of the City related to the regulation and control of traffic; receive recommendations related to traffic; test traffic control devices under actual conditions; and prepare and publish reports on traffic matters and carry out educational activities.

The Volunteer Aid and Relief Fund Committee was established by Council Motion on April 13, 1885. The Motion provided an initial sum of $1000 to be used exclusively for the relief of the "wives and families of those volunteers" called to the front, and established a committee to administer the fund. The Committee consisted of the mayor and six aldermen. The Committee was assisted by a Ladies Association, the members of which found "cases of necessity among the families of the Volunteers". The work of the Committee concluded in October of 1885. An audit of their papers and books was approved by Council and forwarded to the newspaper for publication.